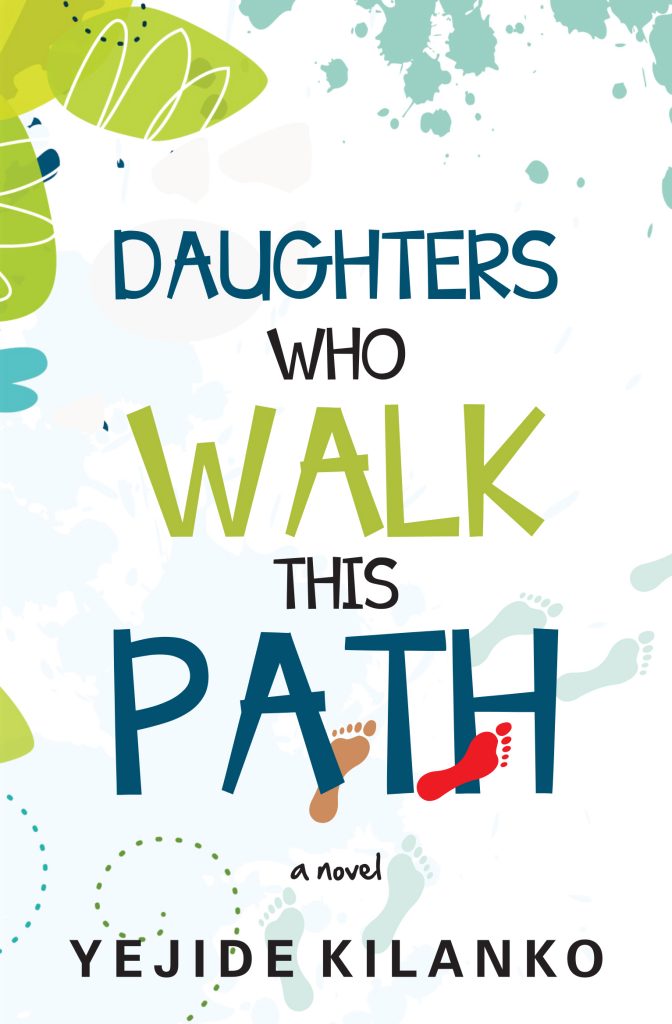 Daughters Who Walk This Path was written by Yejide Kilanko and published almost five years ago. I only just read this book (hereinafter referred to as ‘Daughters’) and it resonated with me in so many ways.

Daughters tells the story of a woman whose entire life was shaped by a staggering event that happened to her as a teenager. The book is divided into different parts and every chapter begins with a quote, proverb or wisdom nugget. Set primarily in Ibadan, a city in South West Nigeria, the book draws most of all its influence from the Yoruba culture. A lot of the language style and structure is derived from Yoruba language. As a Yoruba language enthusiast and advocate, I simply read the book in Yoruba. It occurred to me that what might seem odd in sentence structure, when read in English, is only the result of transliteration. The style of writing was authentic and the layering of the narrative kept the story captivating.

For a book that is not new, the Internet and other forms of print media is filled with reviews about it. Hence, there is no need to do one. However, I’d like to share some of the life tips that Daughters reminded me of.

Being Different Should Not Cause You Shame
Daughters starts with the introduction of Morayo (the main character) and the arrival of her baby sister -Eniayo who is albino. Yejide Kilanko painted a very realistic picture of the reaction of the Nigerian family to the arrival of something different. Kilanko, through Morayo’s 5 year-old eyes, shows us the endemic problem of stigma against people who look different, or people living with disabilities.

Morayo was afraid that the arrival of her albino sister will make her into a social pariah like their neighbour who had a physical disability. Morayo’s mother was not left out of the scathing reprisal from her family either – with her mother inferring that she was somehow to blame for bringing this ‘shame’ to their family. Did she walk under the rays of a morning sun while she was pregnant? Ah! She has ruined the family by birthing an albino child. Shame. Shame. Shame.

Morayo’s mother, Bisoye Ajayi turned all of this around by, first educating her older daughter on the causes of albinism; and then raising Eniayo, to be a strong, confident woman. Eniayo thrived on love.

By the end of the book, I had almost forgotten Eniayo was albino. Her character completely blossomed beyond her difference and it was evident that he mother’s efforts in ensuring that she was well accepted and loved from home, was key to the woman she grew up to be.

Shame is The Boogeyman We Need to Kick Out of our Lives.
A careful analysis of many of the cracks in the structure of our societal existence will reveal shame as the fault line. Once you rip off the band-aid of ‘what will people say?’ we are one step closer to progress. As a victim of rape, Morayo was trapped under the burden of the secret she carried on for so long. One day, she decided to loosen the stranglehold of the burden she alone carried. At dinner table, she swiftly revealed to her family that she was being violated right under her parents’ nose.

The minute she made the decision to kick out the Boogeyman, her rapist was swiftly kicked out. A lot of times, all we need to do is get rid of the thought that there is something to be ashamed of. It is hard to do, especially since we are raised (particularly, in Yoruba land) to be conscious of nkan itiju. (a thing of shame)

If this thing of shame is not letting us breathe, let’s break the chokehold and live free. Life is too short.

Yejide Kilanko fervently pursued this line of thinking in her book by showing us the two sides of shame – mostly a burden unfairly placed on women. An unwed pregnant woman is sent away to live with her granny in the village because her parents can’t bear the shame of people knowing she is pregnant. All of this while the overweight man, who raped her, was strutting around as a peaCOCK. Excuse the pun.

We Need to Re-write the Naija Parents Handbook
There will never be enough pages to talk about Nigerian parents (of the 60s, 70s &80s) This class of parents are special and they have raised a generation of people who have them to use as the reference point of what parenting should be. Daughters Who Walk This Path has an eerily accurate depiction of what Nigerian parents from that ‘set’ were like.

2: They were very external family oriented

3: They did not know how to talk/communicate with their kids

4: Your marriage & subsequent procreation was a testament to their years of hard work.

After Morayo’s rape, Bisoye wracked by her own guilt was unable to talk to her daughter. Thus absence of communication allowed the wound to fester within Morayo. How could her mother not have known? A question both women asked themselves, but the dynamics of the response, if only they had shared this information with each other.

Morayo found herself being drawn to her Aunty Morenike who literally saved her life. We won’t all have life saving aunties near by, so thus generation of Nigerian parents has to learn to do better.

2: Don’t pass on your bigoted biases.

3: Your children have their own path & race; their failure is not yours.

5: Gender biases need to end, and not just with lip service.

Throughout the book, Daughters tried to take a stand for feminism and it was a reminder that girls should never be seen as less people than boys.

Get Regular Medical Check Ups – Because Sometimes, A Boil is Not Just a Boil
I do not like going to the doctors. Doctors scare me and it’s simply because I have always felt that you will go to the doctor for a small fall and they will tell you have 3 months to live. I know this is an irrational fear to live with, but it is what it is. Yejide Kilanko used this book to remind readers of the need for routine checks. Imagine your body is your prized car; think of how much you value and cherish your car, and how you ensure there is constantly fuel, and engine oil. You also take your Bentley (or its equivalent) for regular checks at the mechanic’s workshop. Your body is exactly that Bentley. Take it for regular checks, treat your body with care and give it all the attention it needs.

What was thought to be a small boil in Aunty Morenike’s armpit, ended up being the cause of sorrow to her family and loved ones. We don’t like to admit that this awful disease called cancer has no respect for any body. However, early diagnosis may be the difference between life and death.

Please, go for regular medical check ups. If you notice there’s any pain that is lasting longer than it should, have it checked. If you’re coughing up blood, or sneezing up blood, go to the doctor.

Finally, women are royalty.
They should be honoured & respected as such. Yejide Kilanko was unapologetically feminist with this book. Every female character was strong, tenacious, resilient and determined. Yejide Kilanko did not shy away from evaluating the psychological trauma that we so often push to the back burner. Themes of dedication, fear, hate, honour, friendship and most importantly love, run through the course of the book, making Daughters, the ultimate Women’s Handbook.