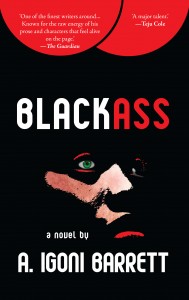 One morning, Furo Wariboko, a 33-year old Nigerian man wakes up to the discovery that he is now White. This random racial metamorphosis is the premise of Igoni Barrett’s debut novel, Blackass – published by Kachifo Limited under its Farafina imprint.

Blackass is a bold attempt at poking holes in the idealism of how the Caucasian race is held to high esteem, in Nigeria. Drawing inspiration from Franz Kafka’s ‘Metamorphosis’, Blackass kicks the reader off on a path of three important questions:

How did this happen to Furo Wariboko?

Why did it happen to him?

Will he be able to change back?

These questions do not seem to bother the character very much, as his primary concern on the morning of this monumental occurrence, is how to get to his previously scheduled job interview.

The author briefly gives us an insight into Furo’s family life, but mostly focuses on the starkness of having a white man loitering around the streets of Lagos – without money, and any particular personal drive.

Running through the book is an accurate depiction of a Lagosian’s response to a “White Sighting”. It speaks to our latent view of the superior position of a Caucasian over a black man. The socio-economic status of the Caucasian is irrelevant, he gets all the passes…just for the colour of his skin. Furo is the beneficiary of a stranger’s unsolicited magnanimity.

Furo, who is penniless and desperate to get to a job interview, encounters a young lady. In the course of the conversation, she asks: “Can I give you some money for the bike fare? She promptly “pulled a thousand naira note out of her handbag, and her face was pleased as she handed it over.”

Furo Wariboko, gets a job (finally) after years unemployment – thanks to his new skin. He is told to resume in a few weeks. Furo doesn’t go back home, or express ecstasy at finally getting a job. Instead, he walks around aimlessly and finally sleeps in an abandoned building.

At this point, the reader might begin to wonder at the direction of the story. Who is Furo and why does he not feel sense of agitation at what has happened to him? What are his likes and dislikes? None of these questions are answered as the story progresses and we are forced to follow the trail, just to see what happens next.

Furo decides to find his way to The Island – where he believes that he will see more people who look like him. Barrett is unequivocal about his intention with the book – forcing you to look at the race and White superiority.

We follow Furo as he strolls around The Palms mall and finds a place to have a drink – where he meets a man called Igoni (who also happens to be a writer.)

Here, the writer makes no bones about showing that an average Nigerian’s impression of the white man is equivalent to dollar bills. Everyone Furo meets assumes he is rich, thus they expect that he has foreign currency to give them.

The only person who doesn’t appear concerned with Furo’s poverty is Syreeta – who wants to have mixed race children with the White man fate seemed to drop on her laps one afternoon at the Palms.

It is Syreeta who discovers that the only part of Furo’s body that remained black was his ass. Furo, who had hitherto not shown any distress at his sudden and strange metamorphosis, is anxious to have his ass ‘bleached’

“Feeling dejected by the enormity of his conundrum, he stared across at Syreeta’s vanity table with its science lab-like collection of cosmetic bottles. In that moment, the sound of running water from the bathroom splashed into his mind and washed up the hull of an idea.

As Furo saw it, his black behind was a problem to be solved. The step he was about to take was better than doing nothing. Better than sitting around hoping. His failure or success would come through his own hands, and if he failed, at least he would know he tried. He had no choice in the decision that had got him where he was, but now that he was here, he would steer his own course” – Page 135

Barrret’s skill as a writer, who isn’t afraid to bend words fluidly, shines through the book. The strong visual impressions created by the clear and careful use of words are the most poignant bits of this book.

“By this time it was clear to Furo that the process was moving along much more smoothly than he’d expected. The bribe-sharing, the queue jumping, the fact non-checking and the customer-handling were as efficient as any system whose design was alimentary: in through the mouth and straight out the anus. He was no more than a bite of food for a subverted system, which chewed him up for money and to avoid the cramp of constipation, shat him out fast.

It was bad business for Passport man to fart where he ate, and so, for his own sake he put real effort into guiding Furo around the hiccups in the bureaucracy.” – Page 116

The beauty of the exquisitely crafted fabric is ripped when Barrett takes the reader into the head of his namesake Igoni. Told in first person, the section about “Morpheus” includes a long expose into the world of Twitter – through the eyes of Igoni.

Maybe Barrett intended to compare two characters that had experienced the same mysterious change. Maybe he wanted to show the readers what Furo’s family was going through in the time he disappeared. Maybe he just wanted to fill the pages of the manuscript.

Perhaps if I needed to understand how Twitter worked as a social tool, I might have enjoyed these bits. The introduction of the character, Morpheus was probably introduced to help bring some sort of resolution to the entire plot but, it failed to do that for me. Morpheus, as well as the large chunks of Twitter excerpts fell flat for me.

Blackass would have been gripping if the writer had jumped on the endless possibilities that the premise presented. However, Igoni Barrett is a fantastic writer whose use of words flows like a soothing stream of cold water on a hot Lagos day.

Blackass was saved by the writer; and will definitely leave you with a sense of introspection about the conscious deference Nigerians have for White people (even Middle Eastern people) – anything but black.